In 1899, just after Union City was incorporated, the Union City Land and Development Company built a large warehouse at the intersection of Walnut and Center Streets. Actually Walnut Street was little more than a path not yet named and Center Street was named Tobacco Street just after the warehouse was built. Interestingly, though the town was named Union City, the business was called Ashpole Warehouse. The investment company asked Neill G. Wade, a shareholder, to operate it in 1899. Opening on September 15, 1899, they sold 500,000 pounds of leaf that season. For 1900, J. D. Kyle of Tennessee was recruited to take over the operation.

In 1902, T. F. Reeves & Co. moved from the Farmers' Warehouse in Lumberton and became manager of a new warehouse, Planters' Warehouse. The exact location of this warehouse is unknown but it was in the general downtown area.

Robeson County Tobacco Warehouse was constructed in 1911 and operated by E. J. Davis & Sons. Mr. Davis had been in the tobacco business since 1885 and was well-respected among his fellow tobacconists.

Peoples Warehouse was built in 1913 and operated by O. A. Reeves & Company. This warehouse was advertised as the best arranged, best lighted and most up-to-date tobacco warehouse in the area. 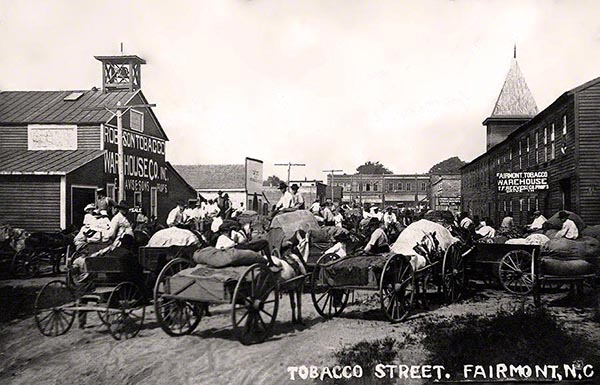