Since the village of Ashpole incorporated as Union City, there has always been two or more barber shops in town. Early records are sketchy at best. J. H. Floyd, Jr. had a barber shop on Main Street but his shop burned in a huge downtown fire on January 15, 1902.

By at least 1910, People's Barber Shop was opened on Main Street. W. J. Hammond was the owner and barbers were Lenard Sweat, Nola Cummings, Percy Locklear and Peter Lowery. A haircut was 25 cents and a shave was 10 cents.

W. Norman McLean was a Fairmont barber in September, 1905 but sold his shop in January, 1910. His shop was located adjacent to the post office (site unknown) but it is not known to whom he sold.

Misters Jessie Prevatte and Bullock were barbers in 1922 with a Center Street location. In October, 1922 they moved their shop to the Floyd building on Main Street. 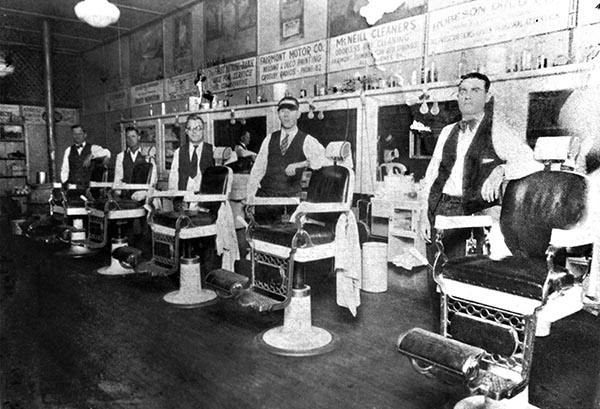 From inside the Fairmont Barber Shop, 1929. Far left is Sandy McCormick, far right is John Musselwhite. Two of the middle three are Red Holt and R. J. Sessoms, the third is not identified. Photo credit: David Musselwhite, used with permission.

There have been as many as four barbers working there at one time and as few as one. David Musselwhite retired in July, 2017 after a barbering career of 65 years, all in that same shop. He sold the business to Ricky Brown, the current operator.

Star Barber Shop was located in the R. L. Pittman building on Main Street, across from Waccamaw Bank. Owned and operated by M. D. Smith and J. L. Prevatte, it also employed John Musselwhite and C. L. Leggette as barbers. It had been in business for 7 years in August, 1934.

Sessom Barber Shop, R. J. Sessoms, proprietor, was located across from Capitol Theater in August, 1935. Its advertisement promised "guaranteed sober service" and said that it had been serving the community for 15 years. In addition to Sessoms, it also employees Red Holt and R. A. Lovett as barbers and Jim Pittman, "the world's best shine boy."

North Side barber shop for Indians, operated by John H. Sampson of Pembroke, was opened in February, 1937. It was just north of Fairmont on the Lumberton Highway adjacent to G. E. Spaulding's North Side Service Station.

Seth Kinlaw operated his own shop in Fairmont for many years in several Main Street locations. In the late 1940s A. C. Bracey worked with Kinlaw before eventually opening his own shop in Lumberton.

Many years ago it was fashionable to get one's hair cut every ten days to two weeks. Now most men get haircuts just once a month or less. The business certainly has changed.

Note: If anyone has other barber shop photos made in any of the above-mentioned shops, we will be happy to include them here if you will use the contact form on the right of this page.