Nettie Ruth Floyd was born December 8, 1917 and was the youngest child of Edgar W. Floyd and Georgia Ashley Floyd. Blind from birth, she was educated at the Governor Morehead School for the Blind in Raleigh, graduating in 1939.

In June, 1940 she acquired her first seeing-eye dog. She was the first women in North Carolina to have one but she didn't know what she wanted to do to earn a living. Charlie Stafford, Fairmont's tobacco market sales supervisor, took her to Raleigh to meet Carl Goerch, editor of The State magazine. Charlie wanted Carl to give her a job and Nettie Ruth was anxious to try it, but Carl was uncertain she could do it and told her so. "I wouldn't want you to be disappointed," he said. Nettie Ruth persisted and Carl finally said "All right. After you sell your first five subscriptions, get back in touch with me and we'll see." The first day she sold ten subscriptions. 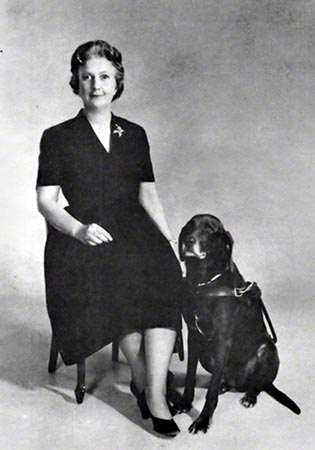 She opened her subscription agency and began working, first in Fairmont, then Lumberton, then to the rest of Robeson County. Traveling was difficult since she had to ride busses everywhere she went. Many times she had to convince the bus driver or the ticket agent that her dog was well behaved. The same for restaurants, banks and doctors' offices. Very few people had ever seen a seeing eye dog and there were no laws mandating they be allowed on public accommodations. She worked tirelessly to end that discrimination as President of the NC Workers for the Blind.

Over the course of her 47 year career, she covered about 150 cities and towns in North and South Carolina, visiting each during the same week each year when last year's subscriptions were ready to be renewed. While she sold subscriptions to all magazines, The State was her best seller and she was its biggest booster. On her 25th anniversary in 1965 (digital page 11) they published a feature in the August 1 edition about how she got started and upon her death in 1988 they did a nice editorial explaining that she had passed away, (digital page 5) outlining her significance to the magazine and to the blind in the Southeast.

She was active in the Trinity United Methodist Church in Fairmont. When she died she had one of the largest private braille libraries in North Carolina, including the Holy Bible and the Methodist Hymnal.