Archie Lewis McDaniel, founder of McDaniel Hardware, was born in Cumberland County, North Carolina in 1880. He came to Fairmont in the early 1900's when it was called Ashpole and, in 1905, opened a bicycle and lawn mower business, later adding groceries and renting a larger building. He was one of three partners who formed Robeson Hardware Company, and for several years he travered for the J. W. Murchison Hardware Company of Wilmington.

In late 1925 he bought E. G. Floyd's hardware and continuously operated the store until his death in 1968. Mr. Archie had a large and diversified trade, partly due to having his son Wade open a watch sales and repair shop in the front of the store. In 1948 he built a two-story building near the railroad tracks on Main Street. They held a grand opening on July 17, 1948 where many door prizes were awarded and refreshments were served. 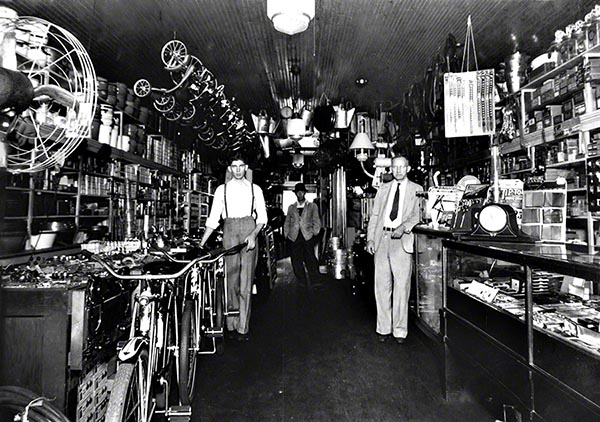 The hardware handled just about everything, selling plumbing supplies when galvanized pipe had to be threaded, electrical wire when it was cotton insulated, garden supplies, bicycles, lawn mowers and too much more than can be named.

Mr. Archie was active in civic and church affairs, was treasurer of Fairmont Lodge No. 528, A.F.& A.M. for 39 years, a charter member of the Fairmont Shrine Club, a town commissioner and a steward of Trinity Methodist Church. In 1954 the Civitan Club dedicated their Farmers Festival to him. In 1962 he was named to the original Southern National Bank local Board of Directors. He died May 25, 1968.