The story of the Town and Country Shop began with the death of George P. Williams, husband of Ansie Williams, in February 1943 at age 37. Mrs. Williams at that time was teaching English and French at Barnesville School. While George was hospitalized Ansie would take her daughter Diane with her to school and let her sit in the back of the classroom. All of their family was in South Carolina so she had no one to help her with the children. 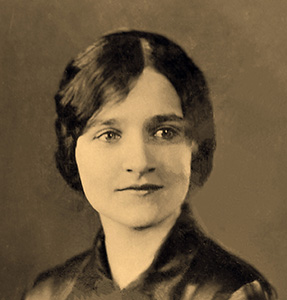 This continued for a time after George's death but in the spring of 1944, Ansie decided that it was time to try something different. She had a well-refined sense of style and knew what clothing flattered women of different sizes and shapes. She also has an unknown business acumen that would serve her well. When school was out she packed up her two children and took them to Sumter, SC to visit relatives, then she went to work. She began converting the living room into a showroom and the dining room into an office. In June, 1944, she travelled to New York City to buy clothes for the upcoming fall season.

Having grown up and lived in small towns, Ansie instinctively knew that women didn't want to "see themselves" walking down the street in the same outfit. From the beginning she would purchase at most three of the same item which meant carefully shopping for suppliers which would allow that. This was a key to her success with Town and Country Shop.

On her return from New York she began preparing for her grand opening. The date was set for July 28, 1944. Invitations were printed and mailed to about 500 ladies in the Fairmont area but the general public was also invited to attend. Advertisements and press releases were placed in The Times-Messenger and The Robesonian, all written by Mrs. Williams. A garden tea party and fashion show was planned with local ladies Mrs. W. G. Fisher, Mrs. Carlton Floyd, Misses Alyce Page Jones, Alice Ashley and Annie Ruth Sealey serving as models. Mother Nature intervened with afternoon rain so they just shifted everything inside. The fashion show was narrated by Mrs. Ruth R. Jennings of Sumter, SC from a script planned and written by Mrs. Williams.

The fashion show provided for a successful beginning for the Town and Country Shop but the first year was not easy. Starting with no credit, Ansie had to operate on consignment until she could establish a solid Dunn & Bradstreet rating which would allow her to purchase on credit. Every Monday for the first year she would travel to meet with agents for her suppliers and pay for what she had sold during the previous week. When that year was up she had her excellent credit rating.

Building on the success of the grand opening, she planned future shows whenever a new season's clothing line would be released. School auditoriums were secured and local women's clubs co-sponsored these events, charging admission to be used for the particular club's benefit.
These events were planned, written and orchestrated by Ansie using local models. She kept meticulous notes and saved everything from the early shows, including how much she spent to produce them.

She learned her customers' birthdays and anniversaries, who their spouses were and where they worked. When that special day was approaching, she would telephone the spouse and say "I know your wife's birthday is next Friday, and I have just the outfit for her! Why don't you come by when you get off work and see what you think?" Many a dress or suit was sold that way. It was easy as the clothes she sold looked stunning.

Using local models for her shows personalized them like nothing else could. Fairmont area ladies could not relate to a Vogue model, but they could relate to Mrs. Maude Grantham, Mrs. Jessie Fisher or Miss Fleta Harrelson, who were locals. She also used husbands and college age area men as escorts, increasing local interest even more. One of Town & Country Shop's fashion shows was an event not to be missed.

As the 1940s became the 1950s and then the 1960s, Ansie kept her line of merchandise up-to-date and appealing. Her eye for fashion and her knowledge of her customers allowed her to spot trends and know what would work in Fairmont. She knew her customers, knew what would look good on each of them, and knew what they could afford. She kept an active file of 500 people and made good use of direct mailers, many of them postcards announcing incoming merchandise for the upcoming season.

It was a sad day in Fairmont when she decided to retire and closed the business in 1972. Many women had purchased all their "good" clothes from her since she opened in 1944 and it took them quite a while to get comfortable shopping anywhere else. She moved to Raleigh to be near her daughter and her family.